Khloé Kardashian revealed the newest addition to her family during the premiere of Season 2 of The Kardashians overnight.

The new mum of two showed the journey to the birth of her son, who arrived just months after her ex Tristan Thompson became involved in a paternity controversy with another woman.

Khloé’s son, who she shares with Thompson and was carried by a surrogate, was born at Cedars-Sinai Medical Center in Los Angeles on July 28.

Her sister, Kim Kardashianwho welcomed two of her own children with the help of a surrogate, joined a nervous Khloé  on the day he was born, assuring Khloé, “You’re never ready, but you’re ready.” Kim also documented the day on her own camera.

Khloé grew emotional as she watched her newborn son be delivered.

“He looks just like True!” Kim can be heard yelling in the video. Khloé also shares four-year-old daughter True with Thompson.

READ MORE: Harry and Meghan secretly fly home to US

The mum-of-two later grew emotional and addressed the timeline of Thompson’s infidelity and her son’s birth.

“Ever since December, it’s been this dark cloud looming over me. Every single day, I’ve been feeling depressed and sad, and now that my son is here, I get to move on, and I get to enjoy. It’s almost like I get to close that chapter and be done with this trauma and put it behind me,” she said.

Viewers also see Khloé FaceTime the rest of her family to introduce them to her son. For the second time, she did allow Thompson into the hospital to meet the baby.

“I’ve been on the fence about letting Tristan come to the hospital or not, but Tristan wants to be here so I just figured, why not let him come? I’ll never get this moment back,” Khloé said.

The two dated in 2016 and welcomed True in 2018. They broke up but reunited after Thompson was caught cheating.

Last year, it was reported that he was expecting a baby with another woman named Maralee Nichols. A paternity test proved he was the father, yet he never told Khloé about the pregnancy.

She said they completed the embryo transfer for their son a few days before Thanksgiving, and she “found out about Tristan’s situation the first week of December”.

“I was definitely very angry and I think feeling bamboozled,” she admitted in the episode. “All I know is I was being encouraged to do [the embryo transfer] by a certain date. In hindsight, he always knew when the other baby was being born, and especially getting the paperwork that we saw — he found out July 2.” 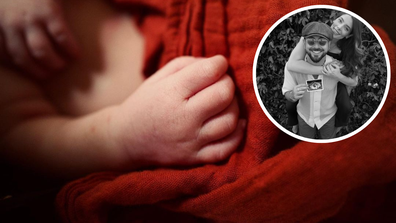